Western Meat Packers Group has welcomed last week’s WA Government $300,000 grant which will help facilitate further processing of offal and other products at its Western Meat Processors’ Cowaramup abattoir operation as part of a $10 million expansion of its integrated operations.

WMPG CEO Andrew Fuda said that investing in this new manufacturing capability would help fully maximise yields from each beef animal and open up new markets, resulting in at least 50 full time new jobs and a host of indirect opportunities for the company and the local community.

“I sincerely thank the State Government and Agriculture and Food Minister Alannah MacTiernan for their support and recognition of regional businesses such as our’s.

“I also acknowledge the high level planning and logistics by Western Meat Processors General Manager Jamie Warburton and his very professional and dedicated team at Cowaramup.”

WMPG’s Cowaramup operation has methodically built its operational capacity over the past 15 years to 70,000 cattle per annum, with most selected from south-west beef producers and distributed domestically and internationally under the Margaret River Fresh brand.

Proudly WA family owned, WMPG has transformed from modest beginnings in 1983 as a small boning room to be one of Australia’s most trusted beef and lamb exporters and processors.

Employing almost 500 people, WMPG now has a weekly processing capacity of 2000 cattle and 1000 lambs that are supplied to domestic and international markets.

FHA-Food & Beverage is known for placing a spotlights on tech innovation and industry transformation in food.

From novel farming methods to connected kitchens, the technological and investment potential in the food tech space has grown dynamically in recent years.

In Singapore, the government, in building a food tech startup ecosystem as part of the nation’s plan to become an innovation hub for Asian food and agriculture sectors, is encouraging companies, from food and beverage corporations, to agri-food entrepreneurs and start-ups to invest in the development of
innovative solutions from food production to distribution.

We are excited to be amongst this company and will showcase our Margaret River Fresh brand and produce.

Like Phoenix Western Meat Packers Rose from the Ashes

The Perth Royal Food Awards have become an important part of the agricultural industry in WA and carry longstanding traditions dating back over 150 years.

They were established as a part of the mission of the Royal Agricultural Society of WA (RASWA) to encourage and reward excellence and support a viable and prosperous future for agricultural communities.

With the support and guidance from independent and skilled judges, committee members, volunteers and exhibitors, the Perth Royal Food Awards have rapidly expanded with new competitions and categories being released each year based on consumer and industry trends.

The Perth Royal Branded Beef Awards were introduced in 2018 and WMPG were successful with being awarded a Gold Medal for its Grass Fed Beef. This year in 2019 it continued it’s winning ways in this category with a Silver medal for our Margaret River Fresh Brand.

The Perth Royal Food Awards are judged by a selection of local, national and international specialist judges who are recognised as experts in their relevant industries.

Video: Chef Adrian Richardson on How to Cook the Perfect Steak

TV Chef Adrian Richardson from Melbourne’s La Luna Bistro restaurant shared his thoughts on how to cook a perfect steak with hundreds of cattle producers at the 2019 Angus Australia conference in Albury.

News of Western Meat Packers Group exhibition at the recent Food and Hotel Exhibition in Vietnam has been well received.

The event in its 10th year is an international trade fair for food, beverages, hotels, bakery, restaurants, catering and equipment and the WMPG’s Margaret River Fresh brand was front and centre in the exhibition. Chief Executive Andrew Fuda made the decision to showcase Margaret River Fresh produce at the exhibition for a second year based on the fabulous reaction from the last time. According to Andrew “Margaret River Fresh branded beef was leading the way by giving its customers a taste sensation second to none. We’ve always made a point of taking every opportunity to spend time with customers and prospects in all of our export markets.

You can download and read a Farm Weekly article about WMPG at Food Hotel Vietnam by CLICKING HERE.

WMPG are on the road promoting it’s exclusive Margaret River Fresh brand at the Vietnam Food and Hospitality Industry event on the 24th though to the 26th of April.

This event represents the 10th anniversary of the Food and Hotel Vietnam event. The event is held at the Saigon Exhibition & Convention Center (SECC), 799 Nguyen Van Linh, District 7, HCMC.

Scott’s down in his favourite region of Western Australia, but it’s not for what you think.

According to Royal Agricultural Society of WA Councillor in Charge, Jo Pluske, the Perth Royal Branded Beef competition had some excellent entries, with all eight receiving a medal, but only one gold was awarded.

“While other entries were extremely tender, they lacked a little in taste and so did not score so highly,” she added.

“While the Margaret River region has long been globally recognised for its fine wines, it is now also acknowledged for its fine food and our Margaret River Fresh branded beef is helping lead the way by giving Australian and overseas consumers a taste sensation second to none,” Mr Fuda said.

“In all of our export markets, including Japan, Korea, USA, Hong Kong and Singapore, there is strong demand for sustainably sourced, clean beef products and the Margaret River region is renowned for these qualities.”

The Margaret River Fresh trademark is registered with IP Australia to Western Meat Packers Group and is used exclusively to package the group’s premier products.

Cattle are selected after grazing on their natural pastures and then raised and fattened almost exclusively on pasture, before carrying the Margaret River Fresh brand after processing at Western Meat Packers abattoir located on 250ha in the Margaret River region.

Western Meat Packers Group, which has an annual turnover of more than $150 million, is 100 per cent owned by Rod Russell, who started the business in 1983 and his wife Shana. 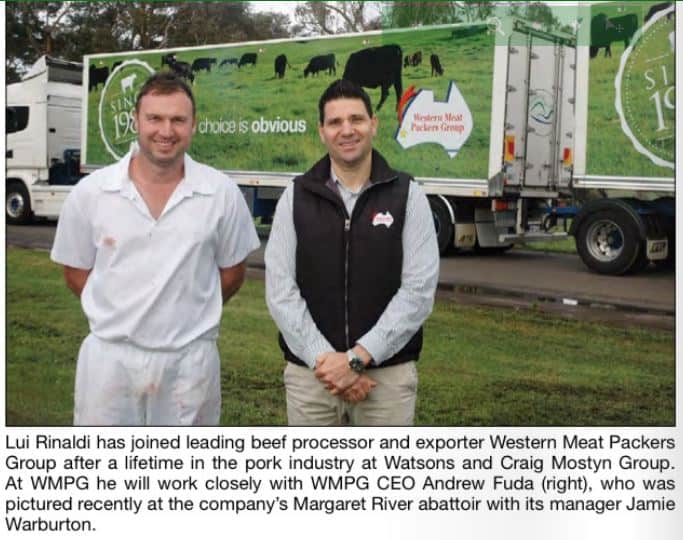 Recently reported in the news have been some exciting Management acquisitions at WMPG.

“Lui Rinaldi has joined leading beef processor and exporter Western Meat Packers Group after a lifetime in the pork industry at Watsons and Craig Mostyn Group. At WMPG he will work closely with WMPG CEO Andrew Fuda.”

According to Brendon Cant “WMPG is a WA beef processor well worth watching. ” Brendon goes on ” With a street wise and very savvy owner in Rod Russell, a very motivated and astute CEO in Andrew Fuda and now with Lui on board, plus a new GM in Jason Spencer (ex JBS), WMPG is going places, so watch this space.”

Now that is a great testament.

This website uses cookies to improve your experience while you navigate through the website. Out of these, the cookies that are categorized as necessary are stored on your browser as they are essential for the working of basic functionalities of the website. We also use third-party cookies that help us analyze and understand how you use this website. These cookies will be stored in your browser only with your consent. You also have the option to opt-out of these cookies. But opting out of some of these cookies may affect your browsing experience.
Necessary Always Enabled
Necessary cookies are absolutely essential for the website to function properly. This category only includes cookies that ensures basic functionalities and security features of the website. These cookies do not store any personal information.
Non-necessary
Any cookies that may not be particularly necessary for the website to function and is used specifically to collect user personal data via analytics, ads, other embedded contents are termed as non-necessary cookies. It is mandatory to procure user consent prior to running these cookies on your website.
SAVE & ACCEPT
Domestic Sales